Hawayah is the exclusive advertising agent for the newspaper, Al Araby Al Jadeed. 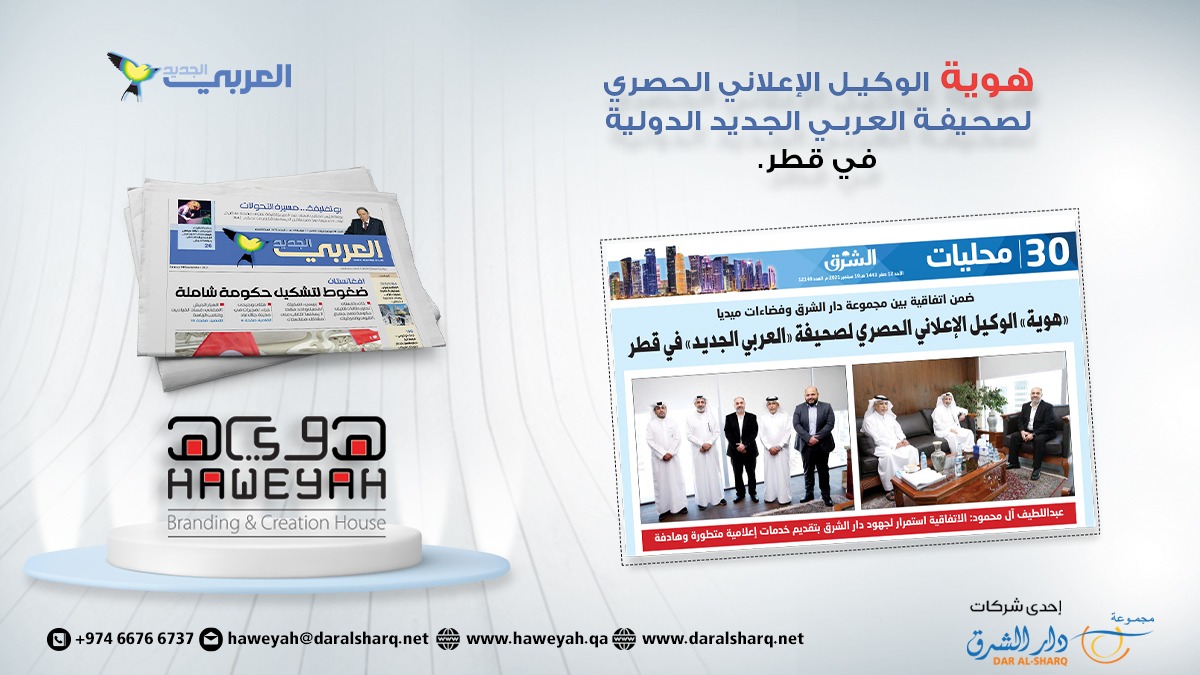 Haweyah Advertising Company, one of the companies of Dar Al Sharq Group, which is considered the largest media organization in Qatar, has signed a partnership agreement with “Fada'at Media Group”, the leading media company and owner of Al-Araby Al-Jadeed newspaper.
By this agreement, "Haweyah" will promote the Al-Araby Al-Jadeed newspaper, in addition to being its authorized and exclusive advertising agent in Qatar, given Dar Al Sharq's relations with clients, official bodies, and the private sector, and the median value of Al-Araby Al-Jadeed newspaper, and a prominent position in the Arab media scene. This agreement will represent a new addition to the Qatari media community.
The agreement also includes enhancing advertising cooperation and exchanging experiences in this field. It is also interested in supporting efforts to support the media march, in both Dar Al Sharq newspapers, and the media institutions and platforms affiliated to Fadaat Media Group.
Opening new horizons
In this regard, Mr. Abdul Latif Al Mahmoud, CEO of Dar Al Sharq, said that the agreement is important as it represents a continuation of the efforts aimed at making the Dar Al Sharq group integrated with all media aspects, such as printed newspapers, advertising and social media companies, printing presses and the establishment of exhibition sites and equipment, noting that Dar Al Sharq always seeks to support the media march in Qatar and open new horizons of cooperation to serve the Qatari and Arab citizens.
He stressed that the agreement will represent a good start towards achieving the partnership objectives represented in Dar Al Sharq's reliance on its relations and strength in the Qatari market and benefiting from the vision and successes of Al Araby Al Jadeed International.

More partnerships
In this regard, Mr. Muayyad Al-Deeb, CEO of Fadaat Media Group, said that cooperation with “Dar Al Sharq” is not new, but rather is the culmination of a partnership in various fields that started since the launch of “The New Arab” and culminated in cooperation in the advertising field. We look forward to more partnerships with media institutions in the State of Qatar to serve the Arab media reality.
Enhance attendance
On the other hand, Mr. Jaber Al-Harami, Executive Vice President of Dar Al-Sharq, said that the agreement comes at a time when Dar Al-Sharq is working to create new opportunities that keep pace with media development and the spirit of the times, relying on new media, as well as introducing multimedia elements in the media work, expressing his happiness in concluding This agreement is considered constructive.
Al-Harami noted the strengthening of the presence of the strong entry of Al-Araby Al-Jadeed newspaper into the Qatari media scene, and Dar Al-Sharq’s support for this trend is very important, especially with the expansion of the opening of Fadaat Media Company with headquarters in Doha, which has become a global hub in political and media affairs, explaining that there are new cooperations. It will be between the two major institutions, serving all parties, and benefiting readers and those interested in the media field.
Promotion coming soon
From his part, Jassim Salman, CEO of Haweyah, which specializes in media, advertising, and new media, said that the agreement represents a qualitative leap in the Qatari market in terms of new ideas and advertising campaigns that have been developed and planned for months, noting that there will be a media and promotional campaign that will be launched at the beginning of the year. 2022 is the year of hosting the World Cup in Qatar, and this campaign will be accompanied by many different and distinctive ideas and great contributions by both groups in this aspect.